Hello My Friend and Welcome.

Today we return to our series on the Games People Played and take a look at the ancient Roman game of Tabula. The game dates back to several centuries BC and was originally known as Alea, meaning gambling. It eventually came to be called Tabula, meaning board or table, since it was played on a board or, more often than not, on a table which had been inscribed with the game’s outline.


SPREADING THROUGHOUT THE EMPIRE AND BEYOND
Tabula was particularly popular with the soldiers of Rome’s Legions. Going with them wherever they went, it was gradually spread throughout the Empire. Tabula moved into Persia, Asia Minor, Syria and Palestine with Pompey’s victories in the early First Century BC. Rome’s influence spread into Egypt, Arabia and North Africa following the defeat of Antony and Cleopatra by Octavian’s general, Agrippa, in the Battle of Actium in 31 BC.

Tabula moved across Europe with the Roman Army, spawning a variety of games throughout the area. The games of Ad Elta Stelpur in Iceland, Taefle and Fayles in England, Sixe-Ace in Spain, and Tourne-case in France all trace their origin back to Tabula. The Arabian game Nard also appears to be a slightly modified version of Tabula combined with aspects of the Egyptian Senet.


Nard spread to the Far East, probably via spice and silk traders, in the early Third Century where it became extremely popular. Chinese tradition attributes the invention of Nard to western India. The considerable diversity of this genre of games, called race games, all of which incorporate a common mode of play. Because of this and the resulting sharing of ideas and innovations, it is sometimes impossible to trace the development of a specific game with absolute certainty.


The similarities between Tabula and modern Backgammon are readily apparent, just as the relationship between Duodecim Scriptorum and Tabula is easily recognized. The primary difference between the latter two is the expanded board of Tabula which allows the playing pieces to be set alongside each other rather than stacked. This change in the board’s dimensions may have been driven by practical necessity.  The typical bone playing pieces were most probably unevenly cut and, therefore, not easy to stack.


A GAME OF HISTORICAL PROPORTIONS
Our detailed knowledge of the rules of Tabula comes from the record of a game played by the emperor Zeno in the year 480. The position of the playing pieces is illustrated below.  Zeno’s defeat was so sudden and unexpected that the details of the game were preserved for posterity. Zeno, playing white, threw a 2, 5 and 6 with the dice, forcing him to break up his three pairs. This left all of his men blocked. Since no other moves were possible, this single throw of dice constituted a game-ending move. 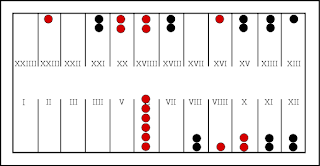 Tabula appears to have been the game of preference for many Emperors. Claudius was particularly fond of the game and, around the year 50AD wrote a history of the game. Though the event is recorded, the document itself has been lost to history. Claudius even had the imperial carriage outfitted with an alveus, or Tabula playing board, so that he could play while traveling. Exactly how Claudius managed to keep the game pieces from sliding around in a rocking carriage is never addressed. This was, after all, well before the introduction of magnetic game boards for use while traveling.


Tabula is primarily responsible for the gambling mania that swept Rome prior to its being declared illegal. During the time in which Rome was a Republic, open gambling was banned except during the winter Saturnalia Festival. Although the ban was weakly and sporadically enforced, gambling carried a fine of four times the stakes.


Tabula players used the same bone roundels used in board games such as Duodecim Scriptorum and Calculi. The colors seem to have been mostly black and white, or blue and white, but other colors have been found. At the high end of the scale, the very rich might use custom-made colored glass pieces instead.

THE RULES OF THE GAME

Each player has 15 playing pieces.
All pieces enter from square 1 and travel counterclockwise.
Three dice are thrown. The count of the dice can be applied to one, two, or three men, but the count on the faces of any of the dice cannot be split.
Any part of a throw which cannot be used is lost, but a player must use the whole value of the throw if possible. (Zeno's fatal situation resulted from this rule.)
If a player’s piece lands on a point with one enemy piece, the enemy piece is removed and must re-enter the game on the next throw.
If a player has 2 or more men on a point, that position is closed to the enemy and the men cannot be captured.
No player may enter the second half of the board until all men have entered the board.
No player may exit the board until all pieces have entered the last quarter. This means that if a single man is hit, the remaining pieces are frozen in the last quarter until that piece re-enters and catches up with them again.

If you would like to try a game of tabula, you can easily create the board with only a piece of posterboard, a ruler and pen. (Some people skip this step and use a backgammon board instead.) Checkers or poker chips make great game pieces.


Until next time, we wish you Peace and Blessings
Posted by E. G. Lewis

Read a Sample: In Three Days

Read a Sample: At Table with the Lord

Book 1 of The History & Tradition Series

Read A Sample: All Things Christmas

Book 3 of The History & Traditions Series

Read a Sample of PROMISES

Book 1 of the Mountain Memories Series

Read a Sample of LOST

Book 2 of the Mountain Memories Series

Read a Sample: Road to Bethlehem

A Prelude to The Seeds of Chrrsitianity Series

Read a Sample of WITNESS

Book One of The Seeds of Christianity Series

Read a Sample of DISCIPLE

Book Two of The Seeds of Christianity Series

Read a Sample of APOSTLE

Book Three of The Seeds of Christianity

Read a Sample of MARTYR

NEW! Book Four of the Seeds of Christianity Series

E. G. Lewis
A former newspaper editor and publisher, Edward (E. G.) Lewis is the author of multiple books, both fiction and nonfiction. His work includes the well-received and widely-popular Seeds of Christianity™ Seties. His articles have appeared in national & regional magazines. He also wrote and directed corporate training films. Mr. Lewis earned a graduate degree in Economics from Ohio State University and worked in Planning and Corporate Management before deciding to become a fulltime novelist. He and his wife, Gail, also a writer, live on the Southern Oregon Coast.